The biggest challenge for budget travelers as they arrived at a foreign country is finding a way to leave the airport. Since money is a limited resource, we often turned to public transportation. In Seoul, the most cost-effective way to get to Seoul from the airport is by the subway. In this post, I will share with you our experience this summer on taking the Seoul Metropolitan Subway to get to Seoul station! The important thing you need to know is that Airport Railroad is part of the Seoul Metropolitan Subway system, linking Incheon International Aiport and Gimpo Airport with Seoul (shown in blue in the subway map below, for easier identification it was marked with a red star). We made our way to the heart of the Seoul city via the all-stop train from Incheon International Airport and making our way back to the airport via the express train. Which one is better? Does the express train worth the extra dollar? Having had both experience, I would share with you our experience and let you be the judge!

So… How to take all-stop train from Incheon International Airport? After arriving at Seoul station, you can transfer to other subway lines if you’re planning to travel further.

When we took the subway, the all-stop train was already fully packed with travelers with large luggage and local commuters at Incheon International Airport Station. As there were no assigned seats, we had to be quick to steal a seat for our 1-hour ride. As it got closer to Seoul Station, the train became even more crowded. It was a bit of a hassle for us to fight through the crowd to get off the train and carry our huge luggage up the stairs/escalators. My overall impression of Seoul’s subway stations was that they were not very traveler-friendly, and that remained true throughout our 1-week stay in Seoul.

My next post will be our experience on getting to Incheon International Airport from Seoul Station via express train. If you’re a shopaholic and always pack your luggage until it reaches the max weight limit, you should definitely read that post! 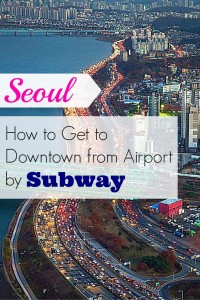 [Korea] How To Claim Tax Refunds At Incheon Int’l Airport