Behind the Scenes at Elgin & Winter Garden Theatre Centre

Toronto is a city with many historic sites. Not many people know, but you can find one right in the heart of downtown Toronto. Located just a few blocks away from Yonge-Dundas Square, the Elgin & Winter Garden Theatre Centre not only has been designated as a national historic site, but also is the last operating double-decker theatre in the world! 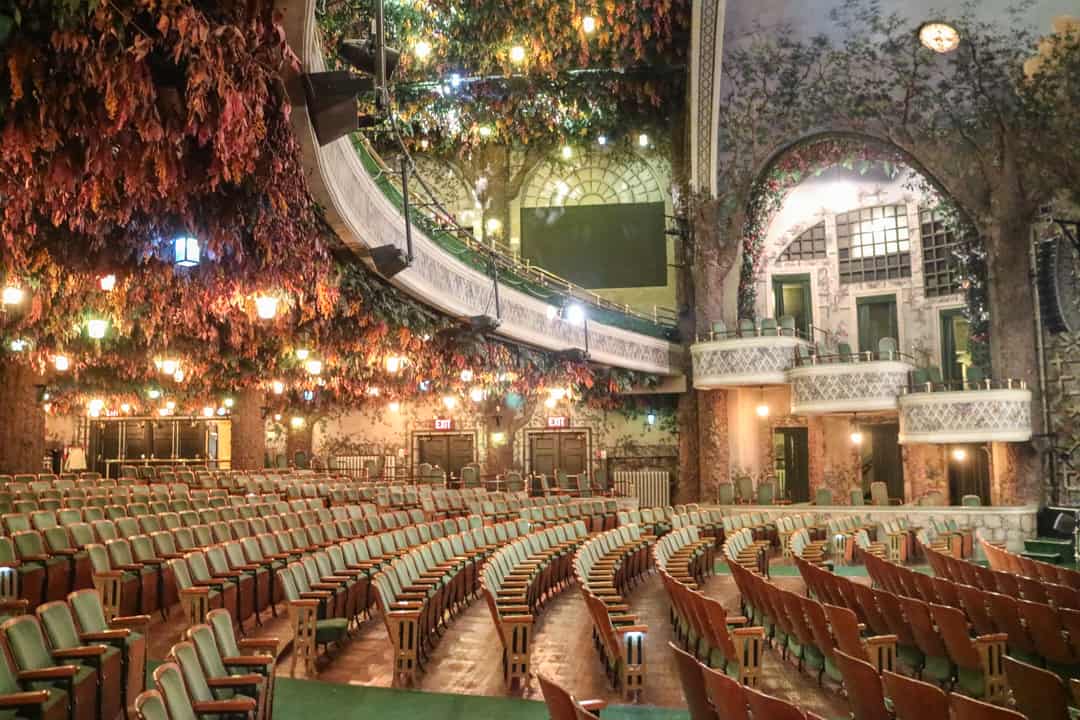 I was super excited when I found out that the theatre provides year-round guided tours to the public. The 90-min tour entails an exciting visit to the original and new lobbies, the grandiose Elgin Theatre, the unique and resplendent Winter Garden Theatre, the backstage exhibit and dressing room, and the world’s largest collection of vaudeville scenery. It is truly a wonderful opportunity for those with great interests in performing arts, architecture and photography to explore inside this state-of-the-art theatre facility! 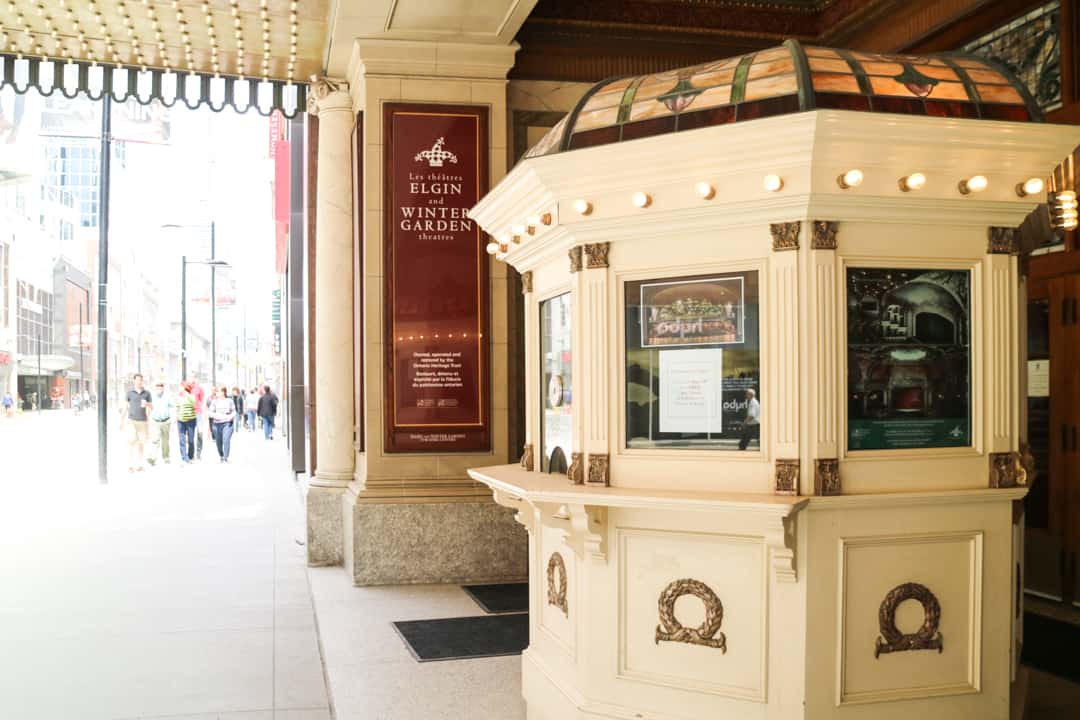 Why is Elgin & Winter Garden Theatre Centre so unique?

Due to the decline of vaudeville’s popularity, patronage to both theatres began to drop through the 1920s, resulting in the closure of the Winter Garden Theatre in 1928. The Elgin was converted into a movie house and remained open until 1981. Immediately after, the Ontario Heritage Trust lobbied to save the building from demolition and began an extensive restoration and preservation process in 1986. After almost 3 years of restoration, the historic Elgin & Winter Garden Theatres reopened in 1989. 65,000 sq. feet of new ancillary space was added, including cascading balconies, lobbies, an 8-storey backstage and rehearsal space, and administration offices. The complex combines old-world elegance with modern amenities. 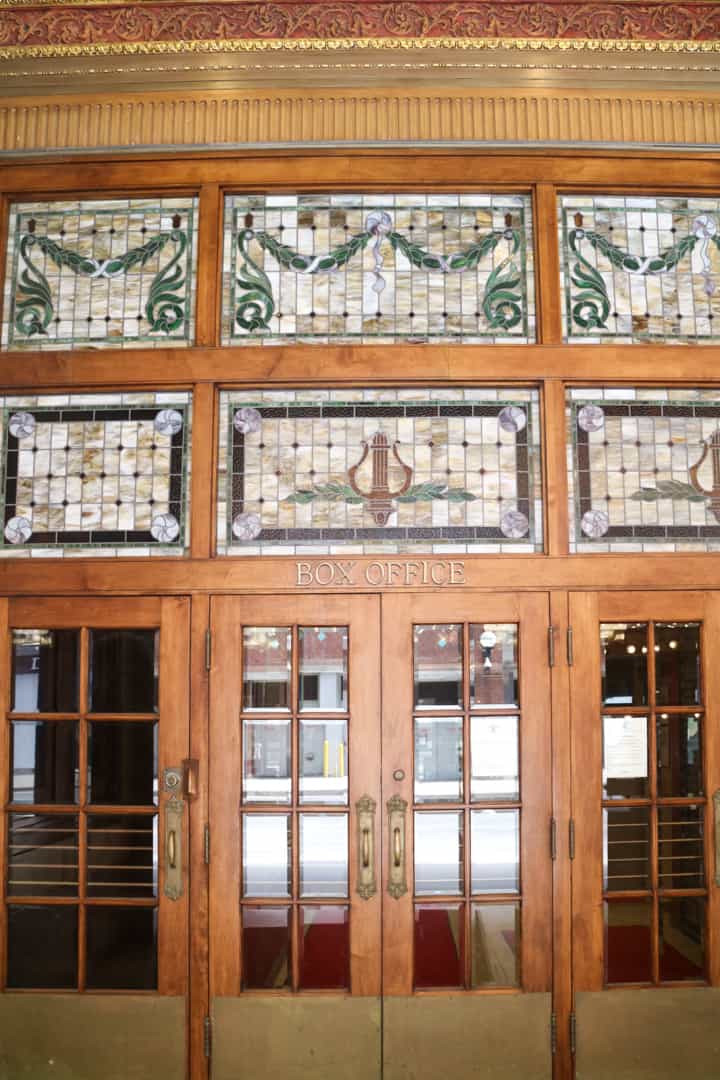 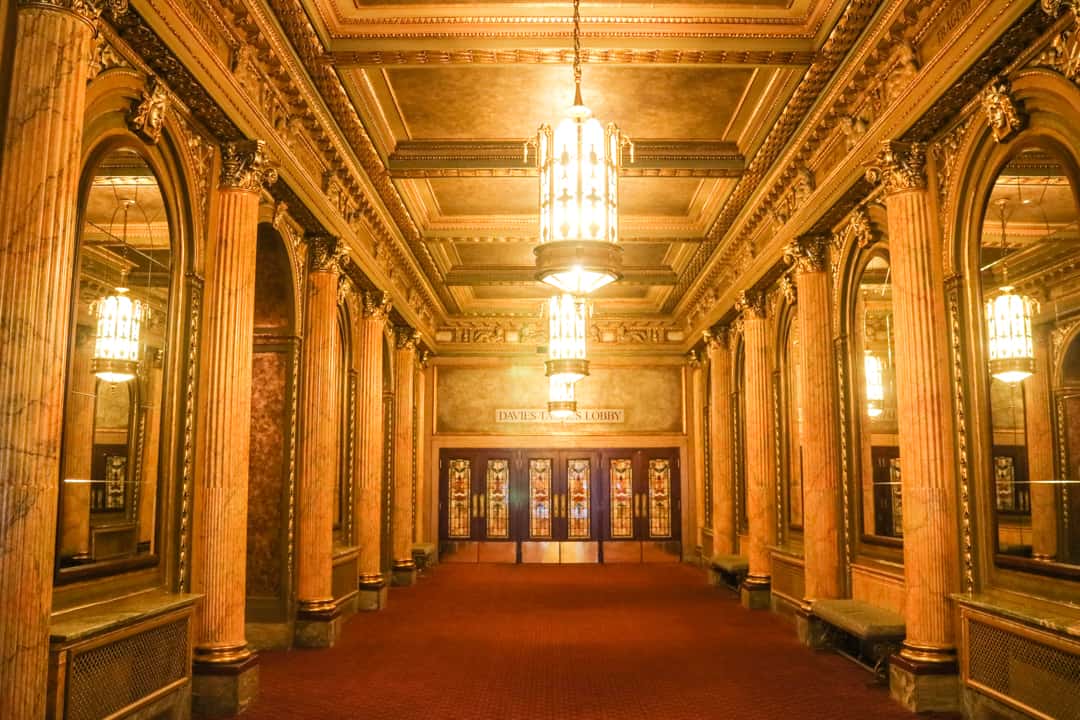 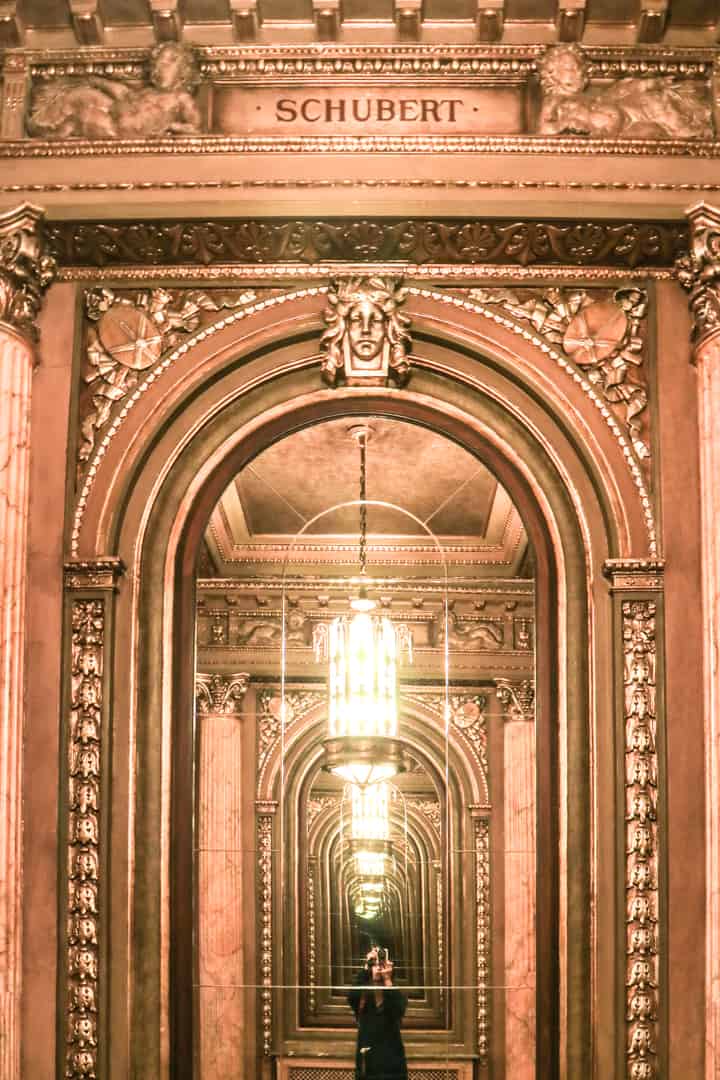 The long, narrow, richly decorated lobby is lined with Corinthian columns with a crimson, brass, and gold colour palette. Gilt-trimmed mirrors and damask wall coverings give the space a special sense of glamor and elegance. The colour scheme carries into the Elgin Theatre, with crimson and gold seen in the seats, draperies and carpeting. The downstairs theatre seats 1561 and features a lavish domed ceiling that is swathed in gold and richly ornamented with garlands, ribbons and masks. Such a dazzling decor! 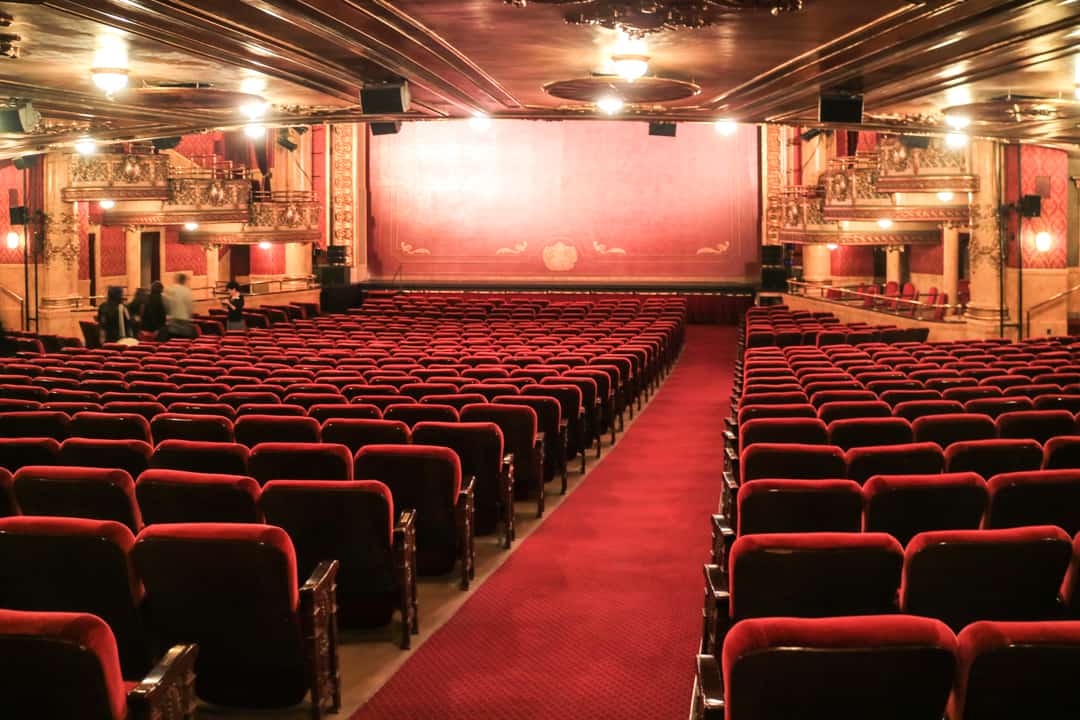 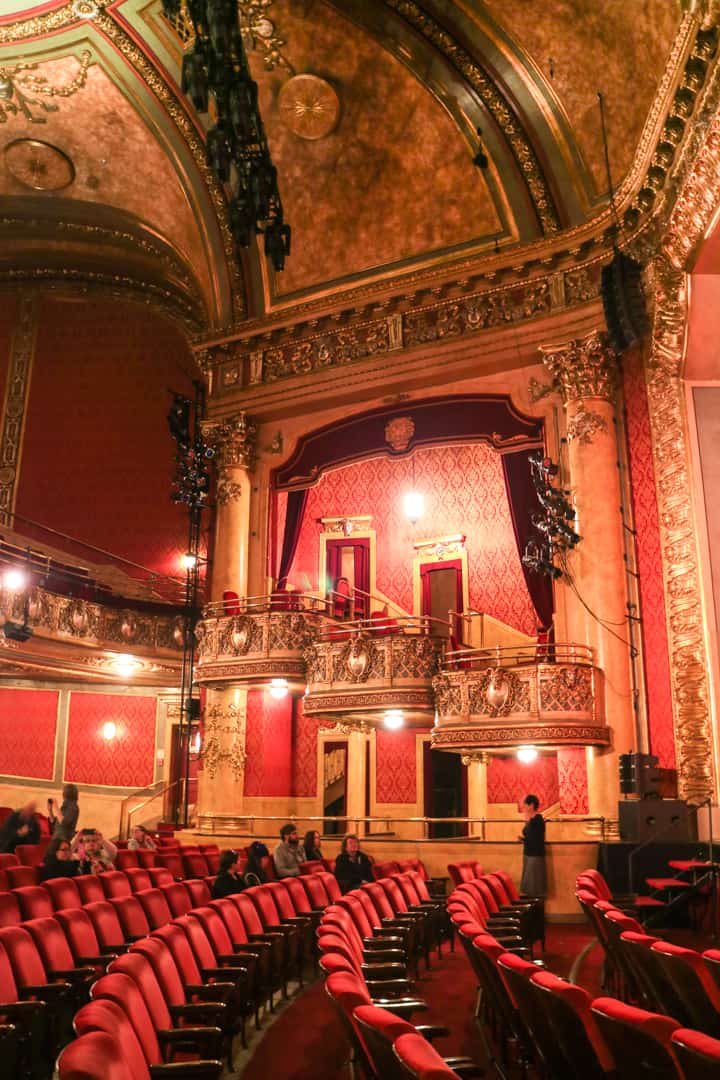 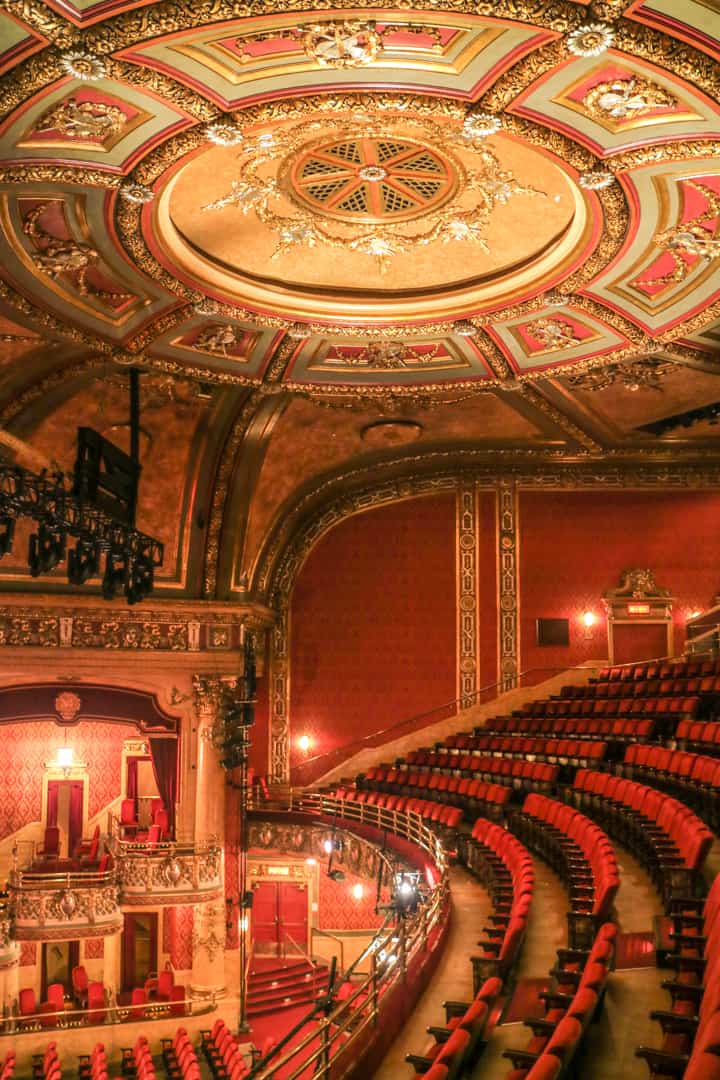 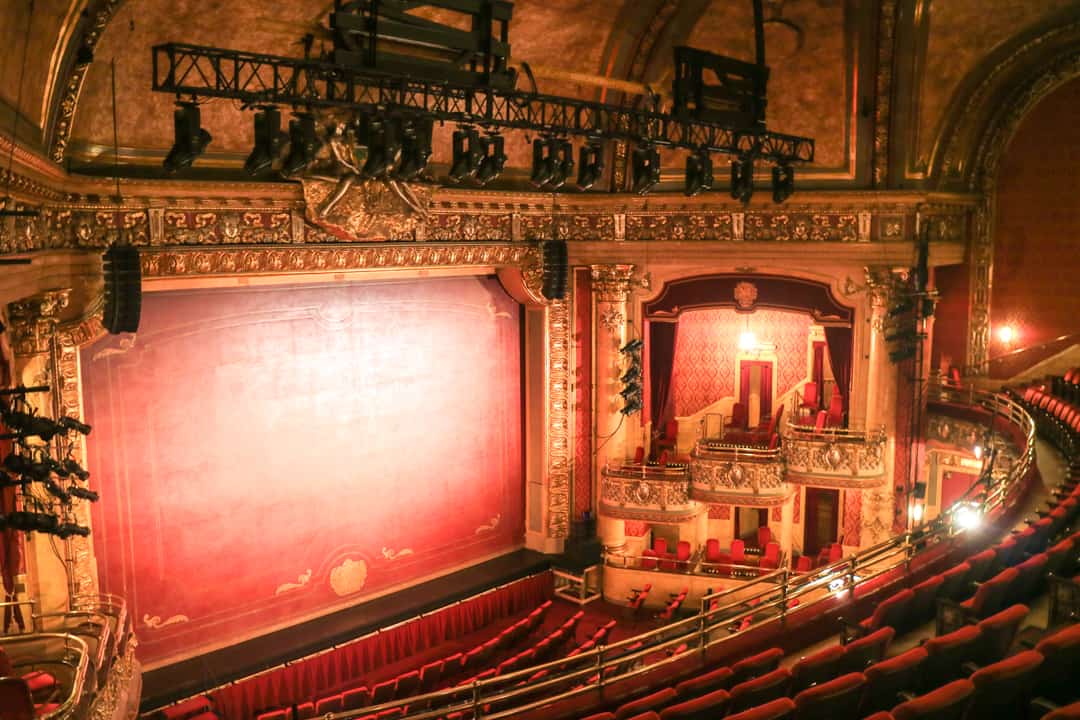 The 992-seat Winter Garden Theatre sits 7 storeys above the Elgin Theatre and was designed in the tradition of an enclosed rooftop theatre. Inspired by the European rooftop theatre with its flowers, leaves, lanterns and garden murals, the Winter Garden theatre has a whimsical rooftop garden atmosphere. Featuring a proscenium arch stage in the front, the theatre has its walls decorated with garden murals, columns disguised as tree trunks, layers of real beech branches woven into the ceiling, and garden lanterns illuminated the whole space. It is as if the theatre has sprouted from a magical forest! 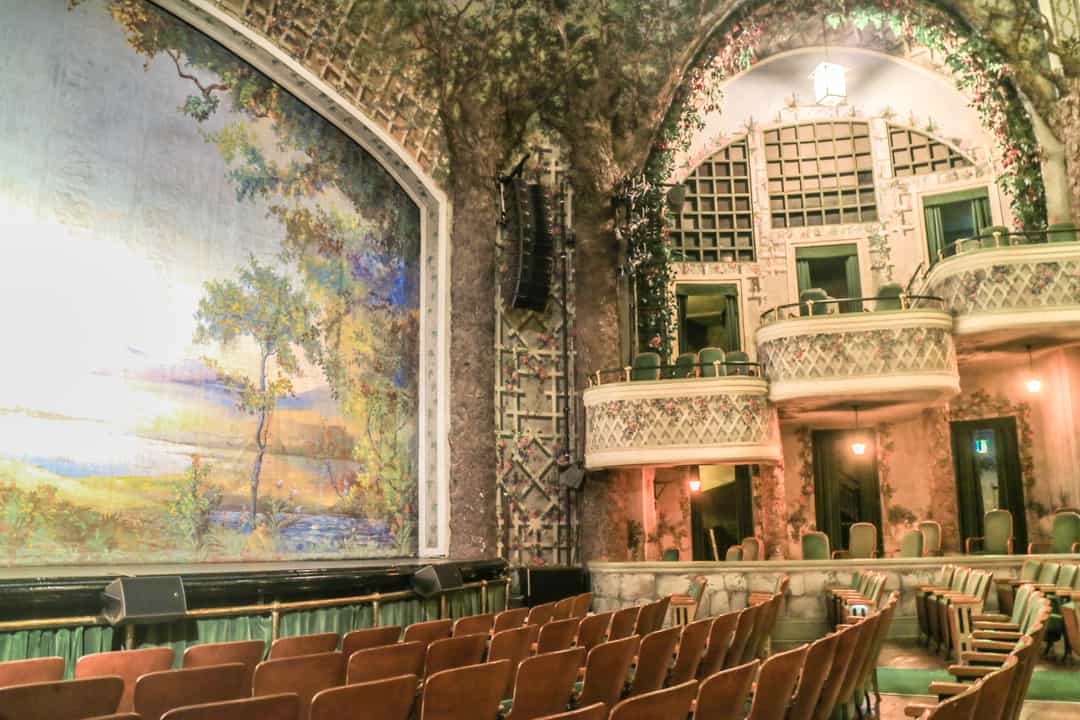 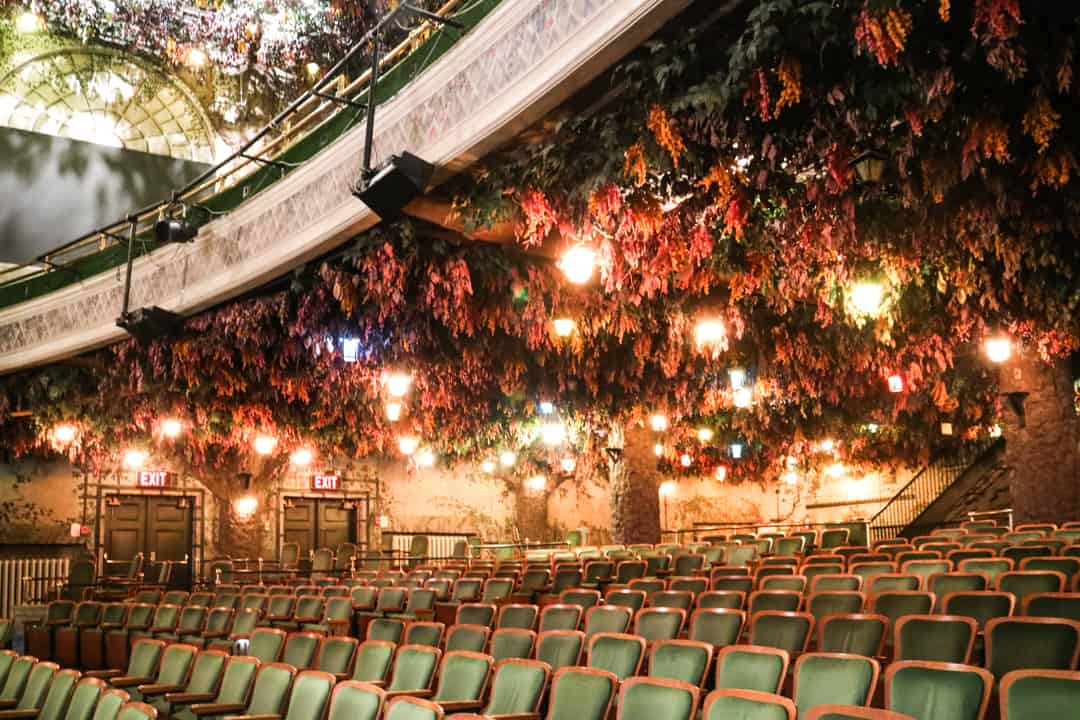 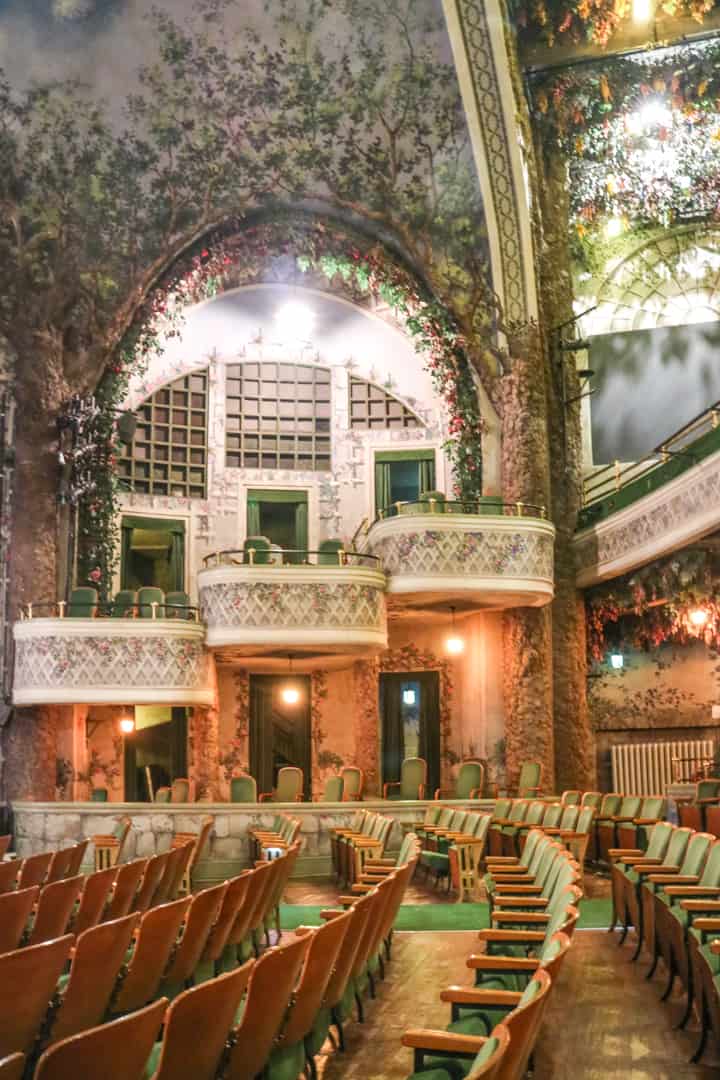 Besides the 2 theatres, there is also a backstage exhibit showcasing the Winter Garden’s original Simplex Silent Film Projector and a dressing room displaying artifacts from the time period. Another highlight is that the Centre has the world’s largest collection of vaudeville scenery. They are hand-painted flats and drops from 1913-1918, several of which are now displayed in the cascading lobbies. 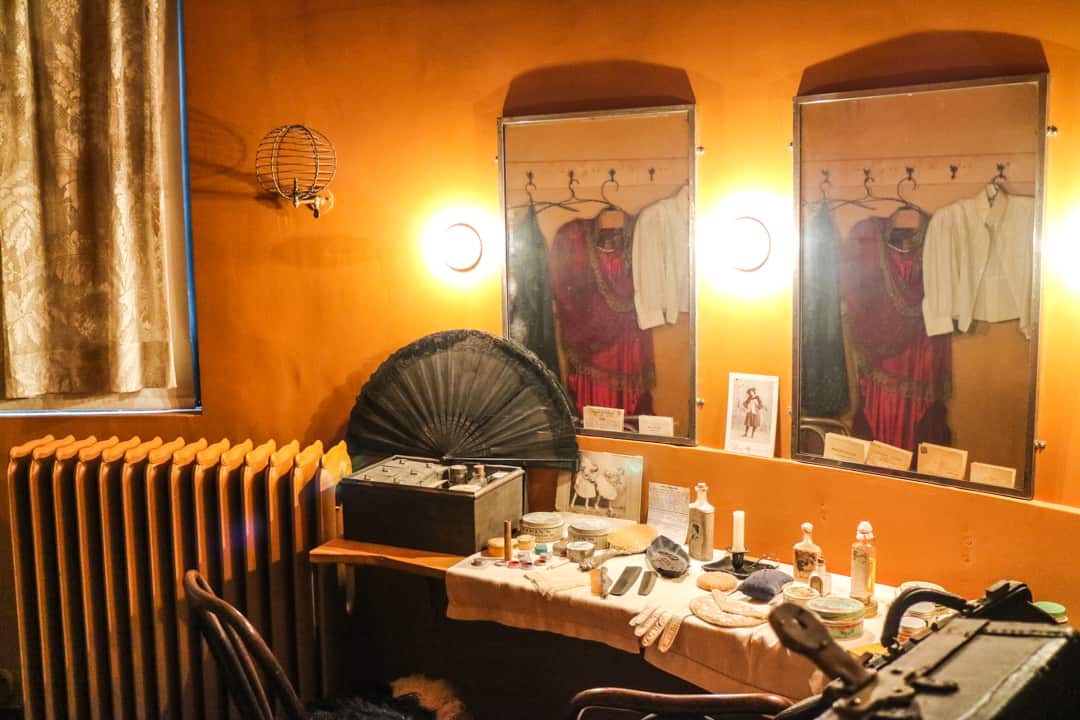 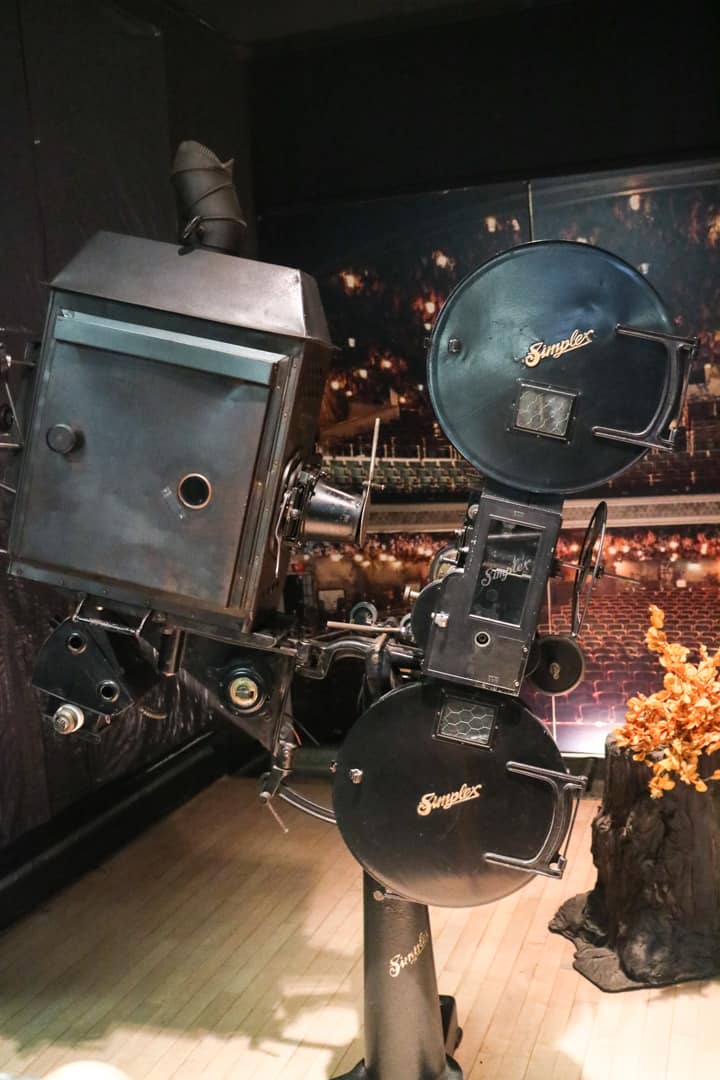 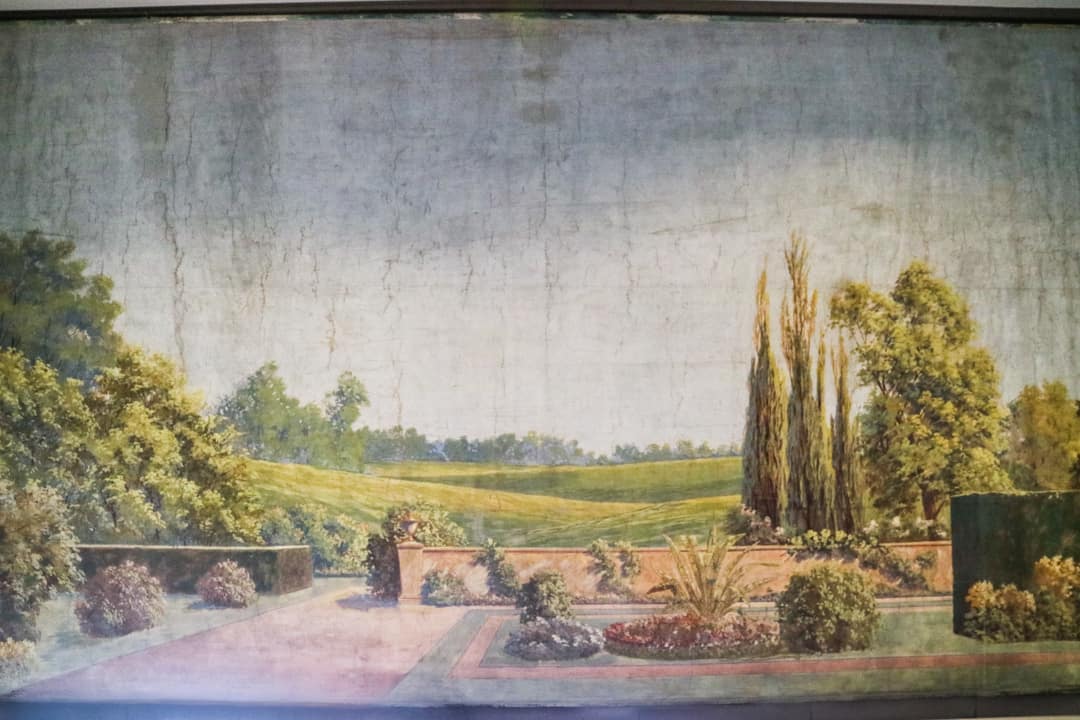 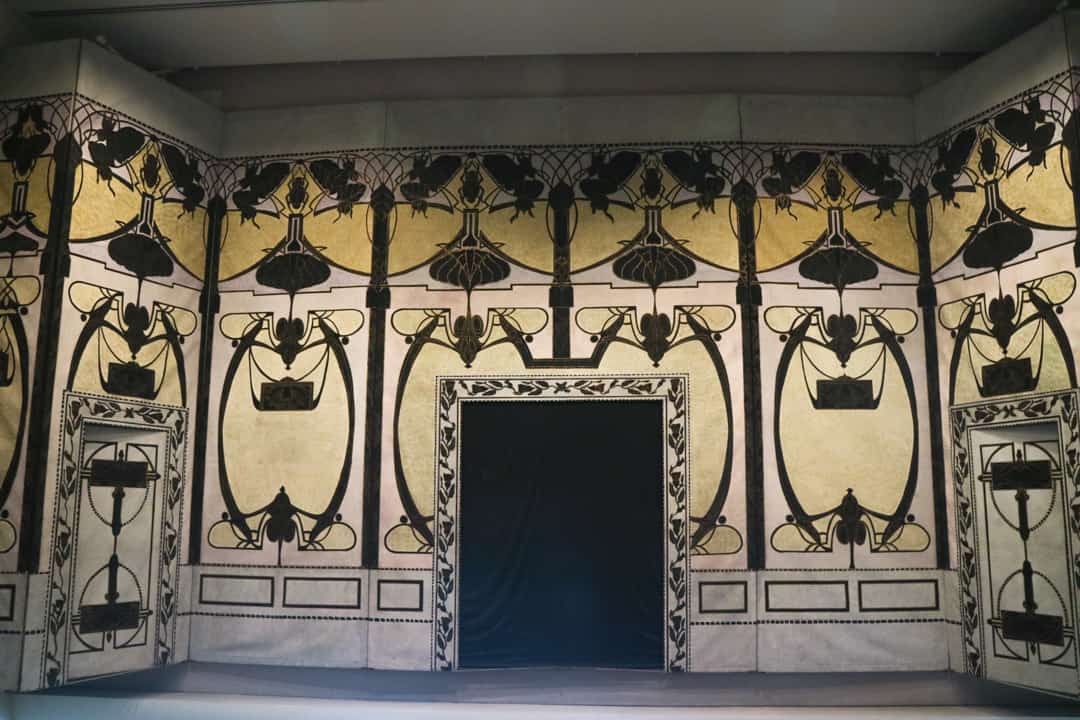 The Elgin and Winter Garden Theatre Centre is an awe-inspiring site. Since its reopening, it has continued to play an active and vital part in Toronto’s vibrant arts and cultural community. The facility hosts a variety of entertainment ranging from musicals, comedies, dramas, operas, concerts and screenings for the Toronto International Film Festival. I strongly recommend anyone who is visiting Toronto to check out the Elgin and Winter Garden Theatre Centre. Join the knowledgeable theatre staff on a guided tour to explore the grand architecture and learn about the interesting story behind it. I promise it won’t disappoint!

About the Elgin & Winter Theatre Centre 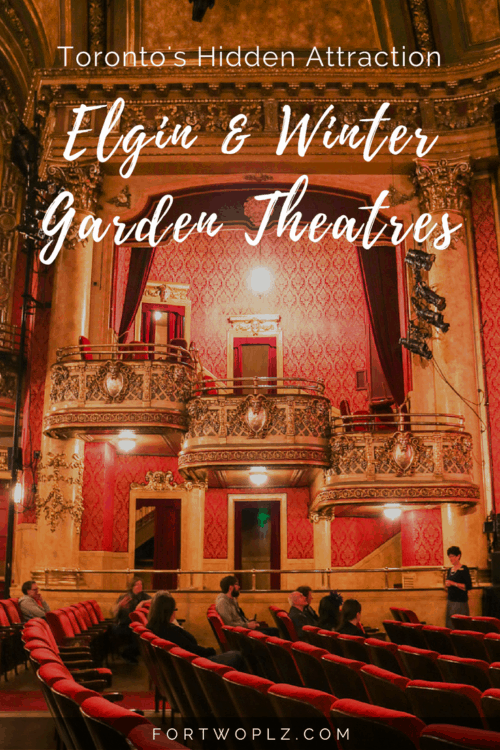