How To Get Around Toronto With Subway & Streetcars

If you asked me what’s the one thing I learned from my Toronto trip, I would tell you: Toronto is not a walkable city. I realized I made the mistake of underestimating the distance to destinations when my feet started hurting and cracking after 2 days of excessive walking. A route might look close enough to walk on the map, in reality it is often further than expected. Unless you have a healthy budget for transportation, do yourself a favour and purchase a PRESTO card. Not only does it give you a discount for getting in to the city from Pearson Airport, but also lets you take public transportation without the hassle to keep finding cash to pay for the tickets. Subway and streetcars are the most inexpensive and convenient way to get around Toronto and you should take advantage of it. Now grab your Presto card and explore the city with me! 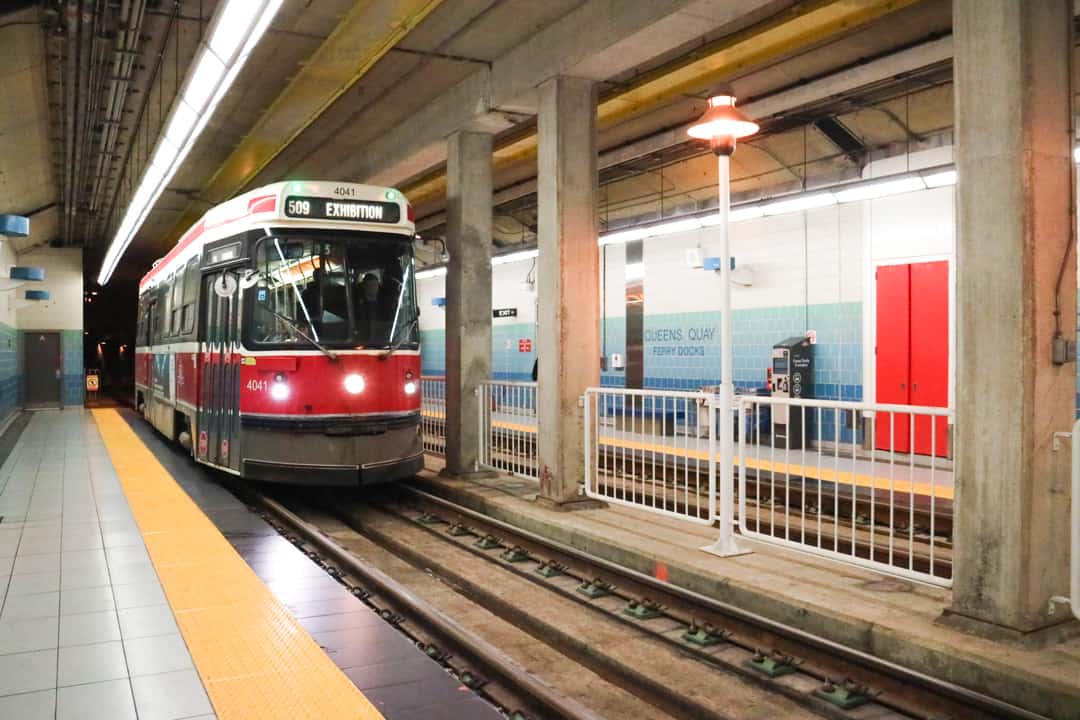 What is PRESTO Card?

Before we dive into Toronto’s subway system, let’s talk about PRESTO cards. As mentioned in my previous UP Express post, it is a prepaid electronic fare card that allows you to pay transit fare electronically. Currently, it can be used on all streetcars, 30 subway stations, as well as GO Transit, Union Pearson Express, eight other Greater Toronto Area transit agencies and on OC Transpo in Ottawa. By the end of 2016, PRESTO will be installed at all subway stations and on all buses. One of the biggest advantage of having a PRESTO card is that when taking the UP Express from Pearson Airport to downtown Union Station, the card gives you $3 discount on the $12 regular fare. Thus, if you plan to take the public transport frequently, it is a no-brainer to buy a card!

You can purchase a PRESTO card online (if you have a Canada mailing address) or in person at selected stations. The card itself costs $6.00 and each ride (subway/streetcar) costs $2.90. 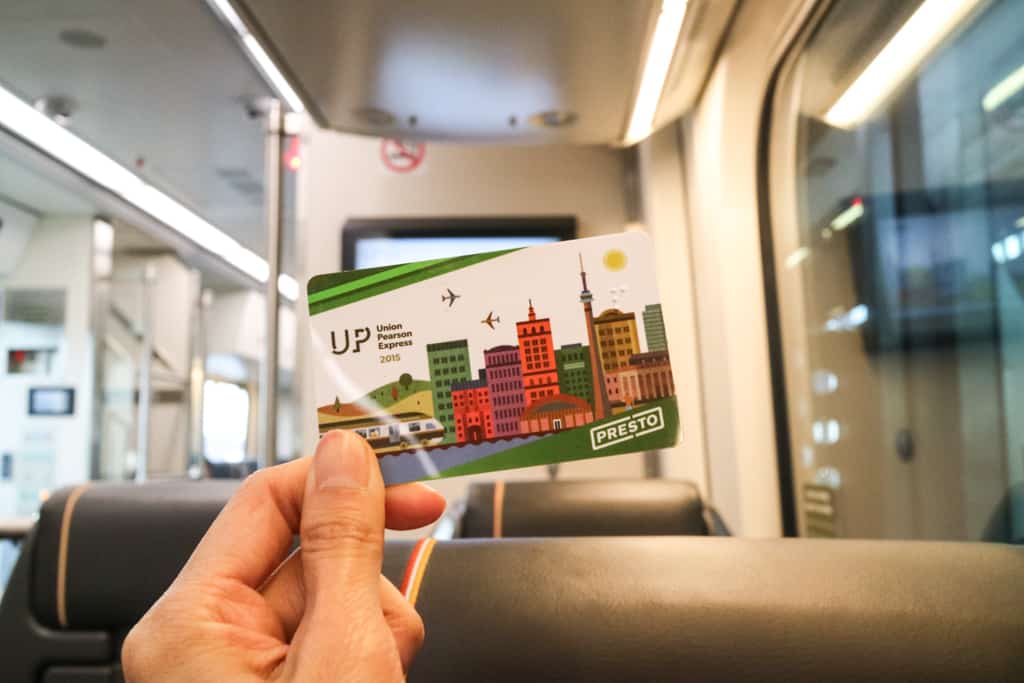 4 subway lines run across the city of Toronto:

Most attractions can be reached by line 1 or 2, with a transfer to streetcars which we will discussed in the latter portion of this post. Line 3 and 4 will take you to suburban areas. Below is the most updated subway map (as of June 2016) with an indication of stations where PRESTO has been installed. 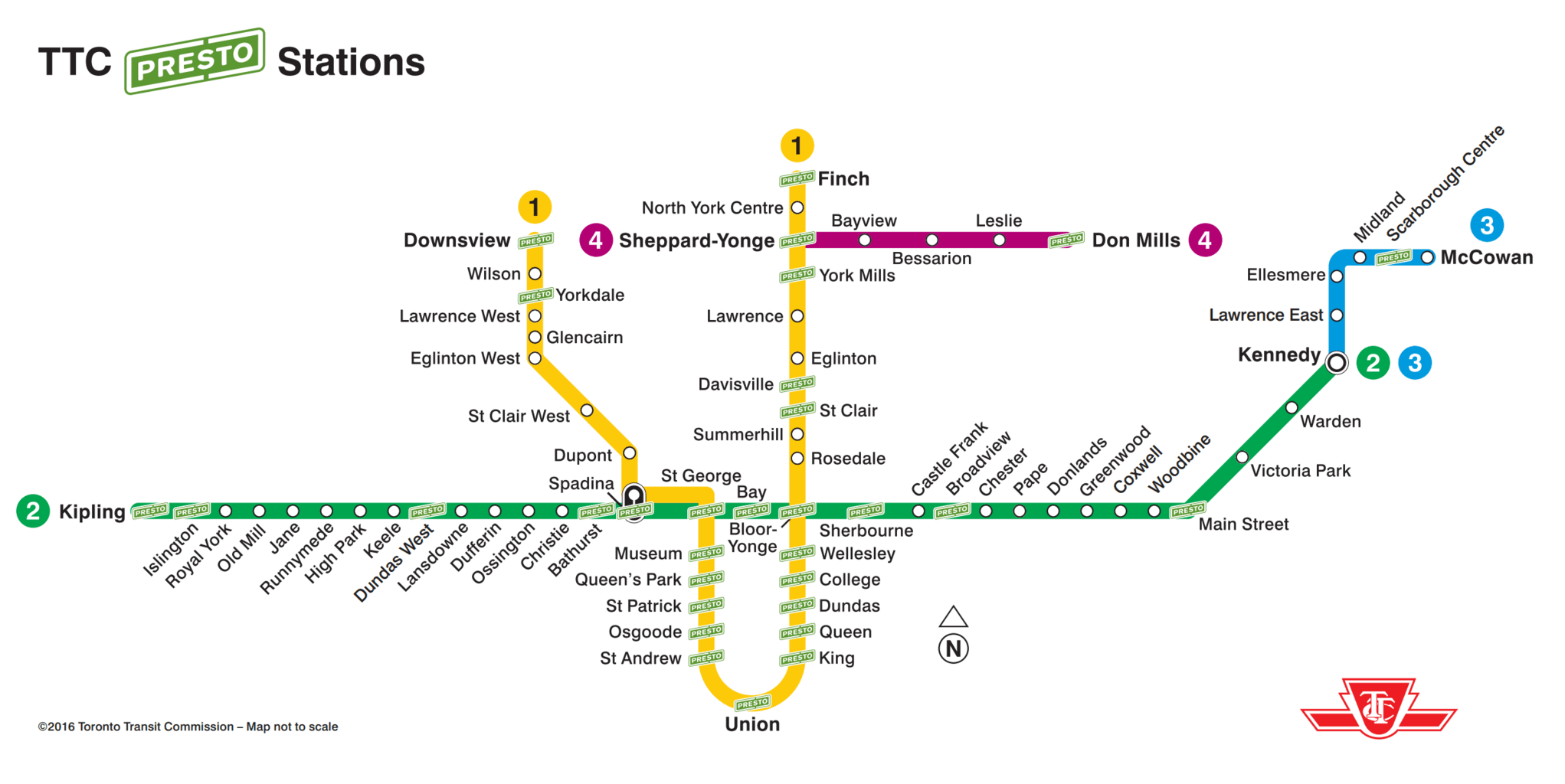 How to take TTC Subway? 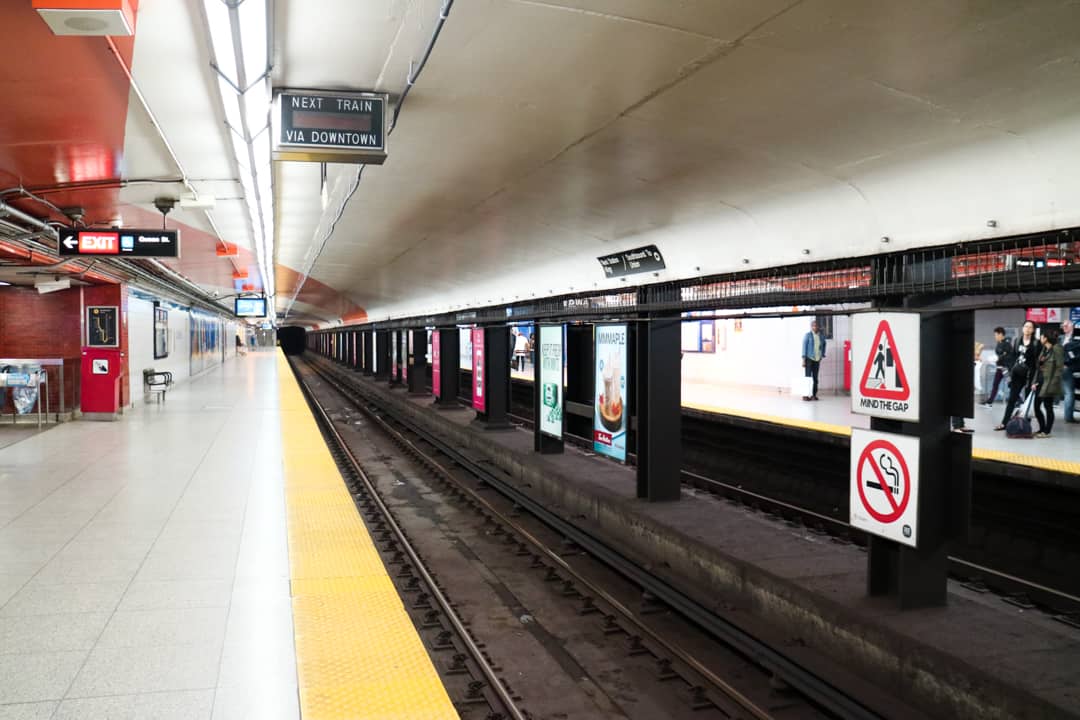 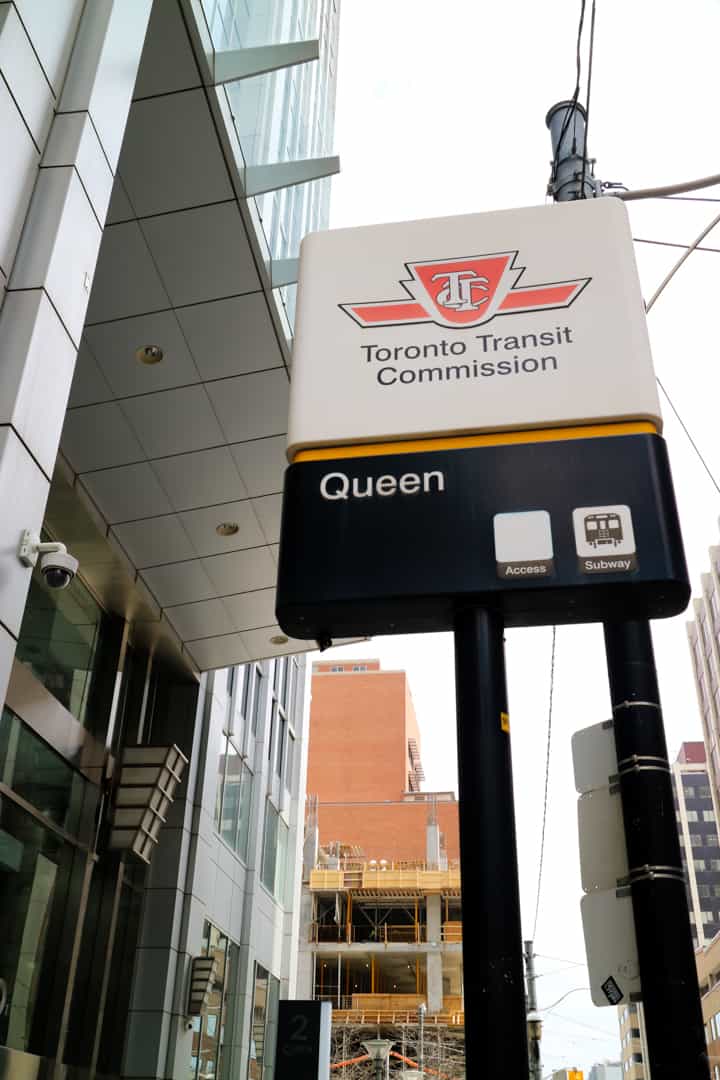 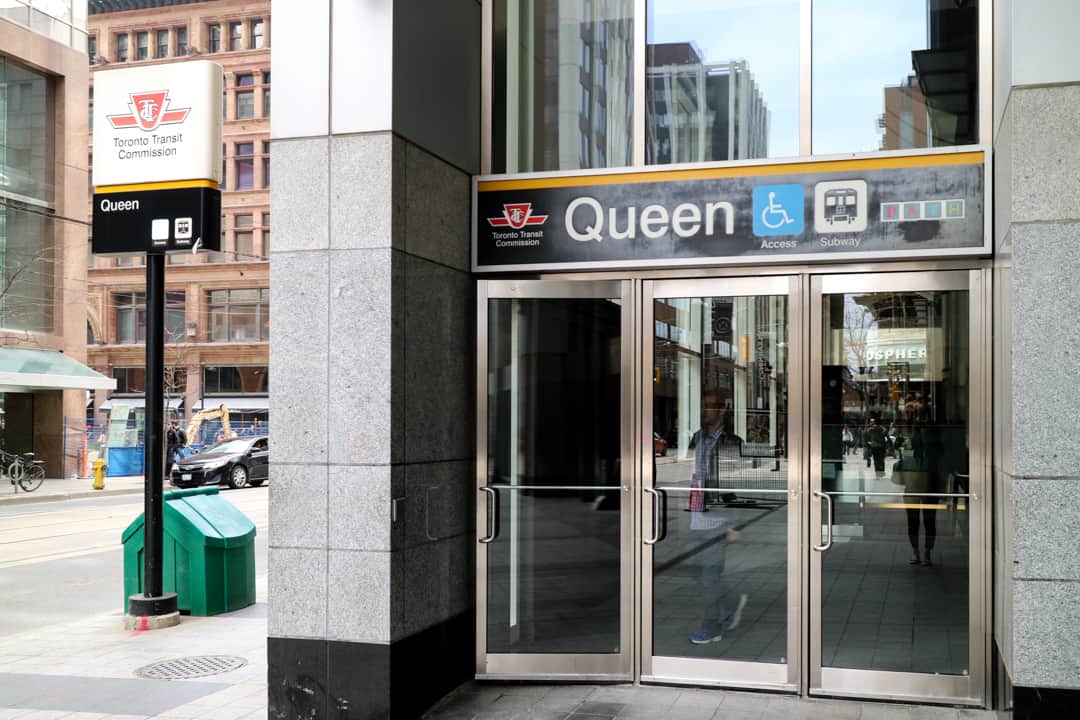 When you see a TTC sign, that means a subway station is nearby. In this photo, the subway is just around the corner, sharing an entrance with an office building

For stations that have PRESTO installed, you simply tap your PRESTO card on the card reader at the front of the turnstile. The fare will automatically be deducted from your card. If you need to transfer to a bus later, go to the transfer machine inside the paid area near the entrance and take a transfer ticket. That will be your proof-of-payment which you need to carry it and show it when you board the bus.

Note: Since PRESTO has not been fully rolled out at all stations and buses, it is strongly advised to carry some cash with you in the event the station or vehicle is not yet PRESTO-equipped. 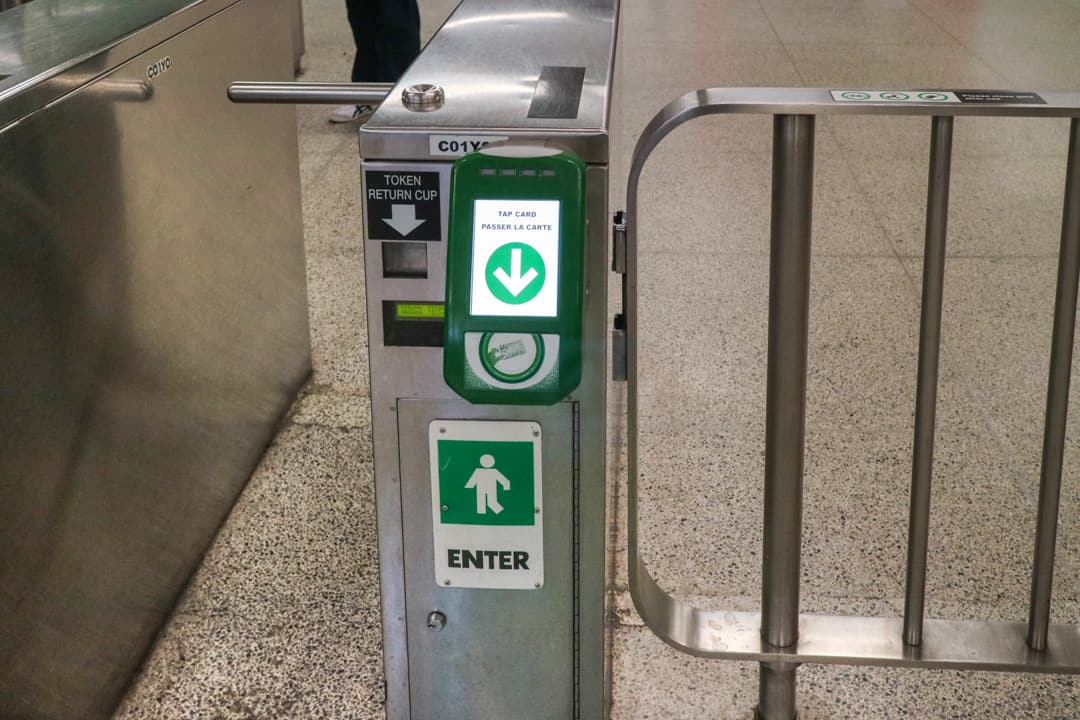 To ensure you arrive at the correct platform, follow the sign of the subway line and direction you’re traveling towards. Most of the time, it is fairly self-explanatory. All you need to do is check: 1) the subway line number and 2) the direction (northbound, southbound, eastbound, westbound). In the event you’re unsure about the direction, check the last station of the route is correct. 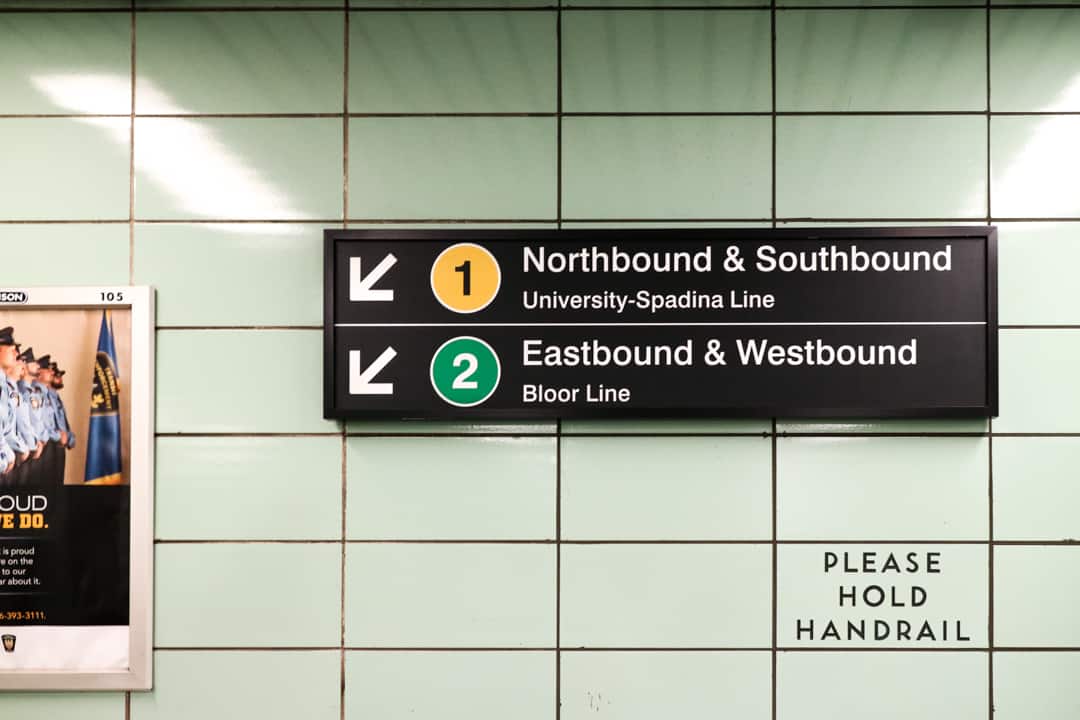 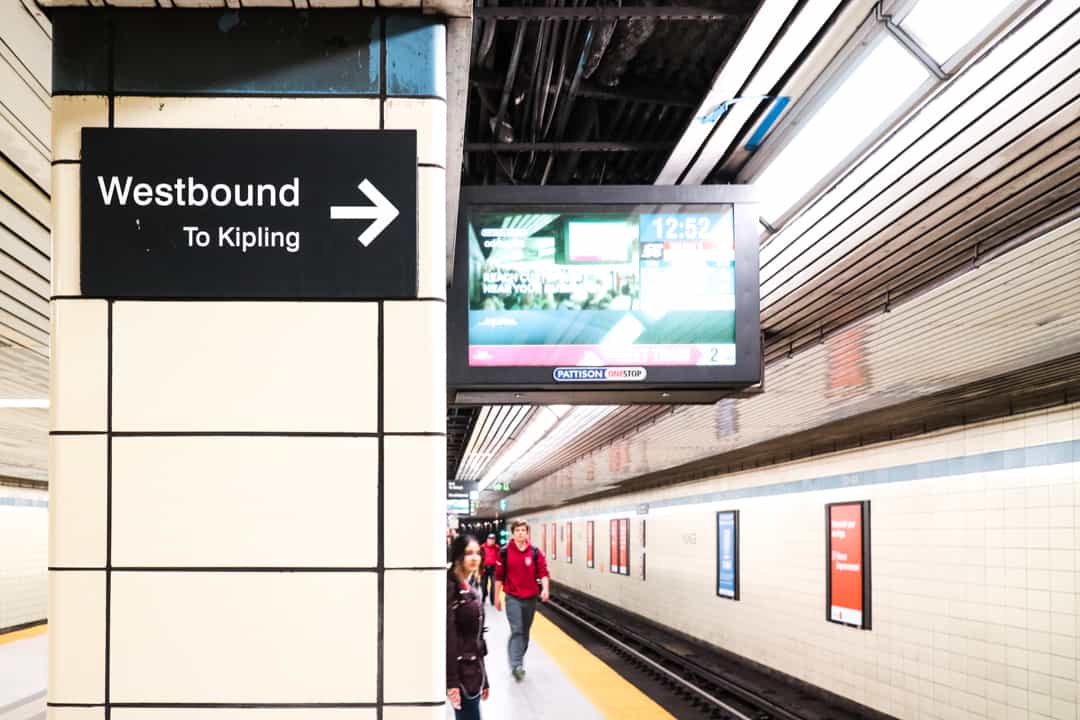 to double check you are on the right platform, make sure the last station of the route is correct

Line 1 has a U-shaped route so it can get a little tricky. At Union Station, you will see 2 northbound platforms: one called University Line, the other one Yonge Line. 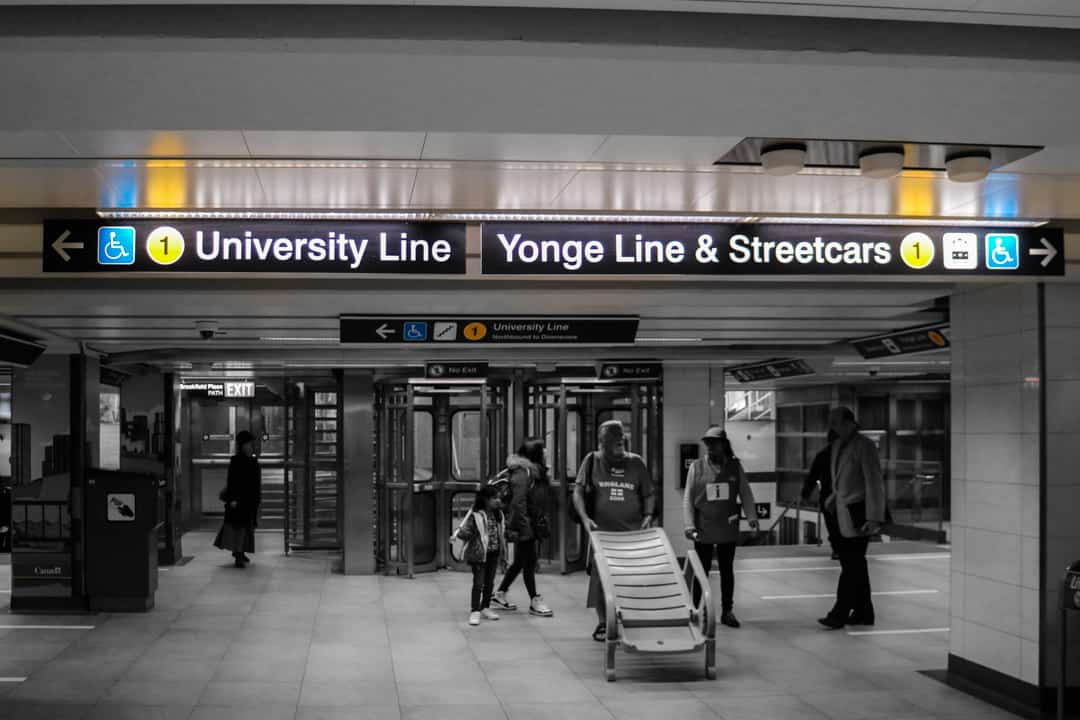 Yonge line is running along Yonge Street, bounding for Finch Station. University line, on the other hand, runs through University district and bounds for Downsview Station. Make sure you check that prior to boarding a train! 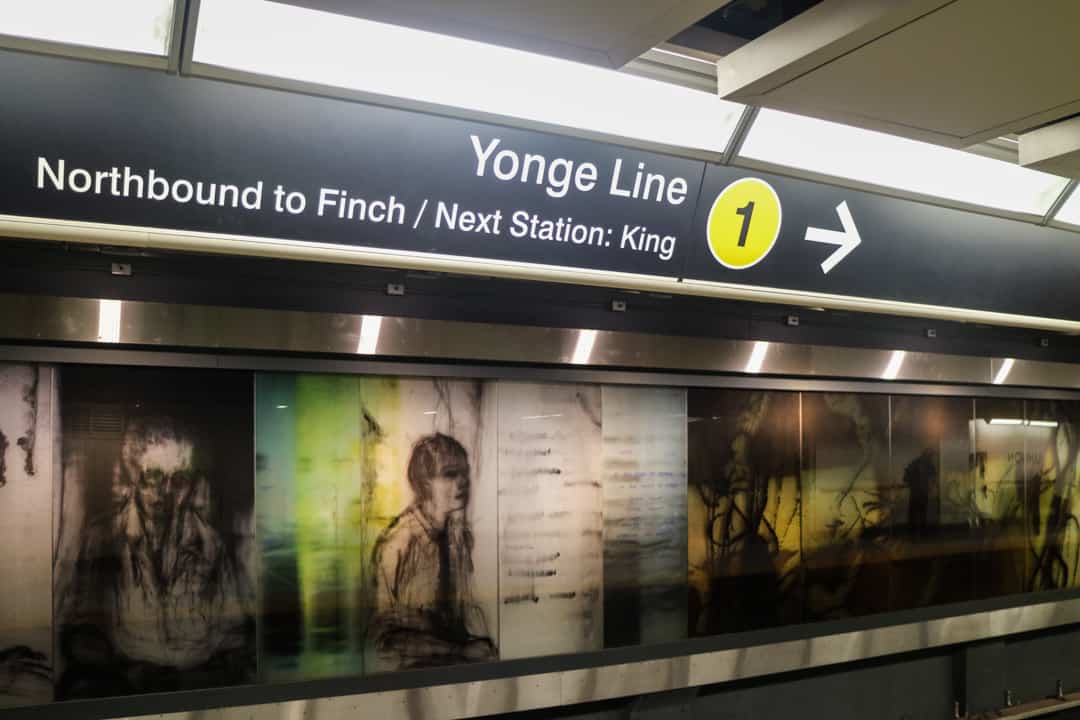 Yay, the difficult part is over! Now just enjoy the ride and disembark at your destination station. Remember, when exit a station, you DO NOT need to tap your PRESTO card. 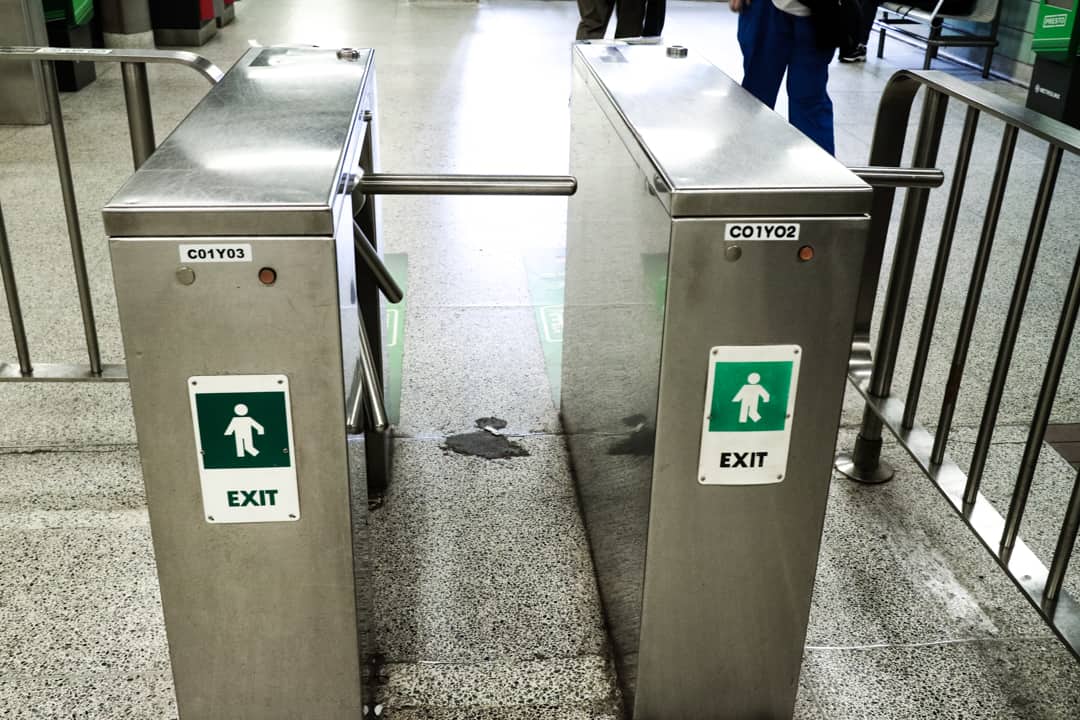 Let’s talk about streetcars, which is known in some parts of the world as trams or trolleys. TTC has an extensive streetcar network that covers the city with 11 routes. Most of the streetcars operate above-ground through downtown Toronto, covering areas that subway do not have access to. For me, streetcars are far more convenient than subway. I took them everyday and more frequently than subway. Moreover, most restaurants are nestled on Queen Street West, King Street West and Ossington Avenue, which are only accessible by streetcars (not subway).

How do you know if there is a streetcar stop? Look for a white pole with red bands and a streetcar icon. Most stops are found on the sidewalk just like a bus stop. You will have to wait until a streetcar stops (usually in the middle lane of a street – it is weird, I know, don’t ask me why), then walk out onto the street and board it. In some cases, the stop and waiting area are found on a separate platform along the tracks.

All streetcars have PRESTO installed so tap your PRESTO card on the card reader when you board. Similar to subway, when you embark, you don’t need to tap again. 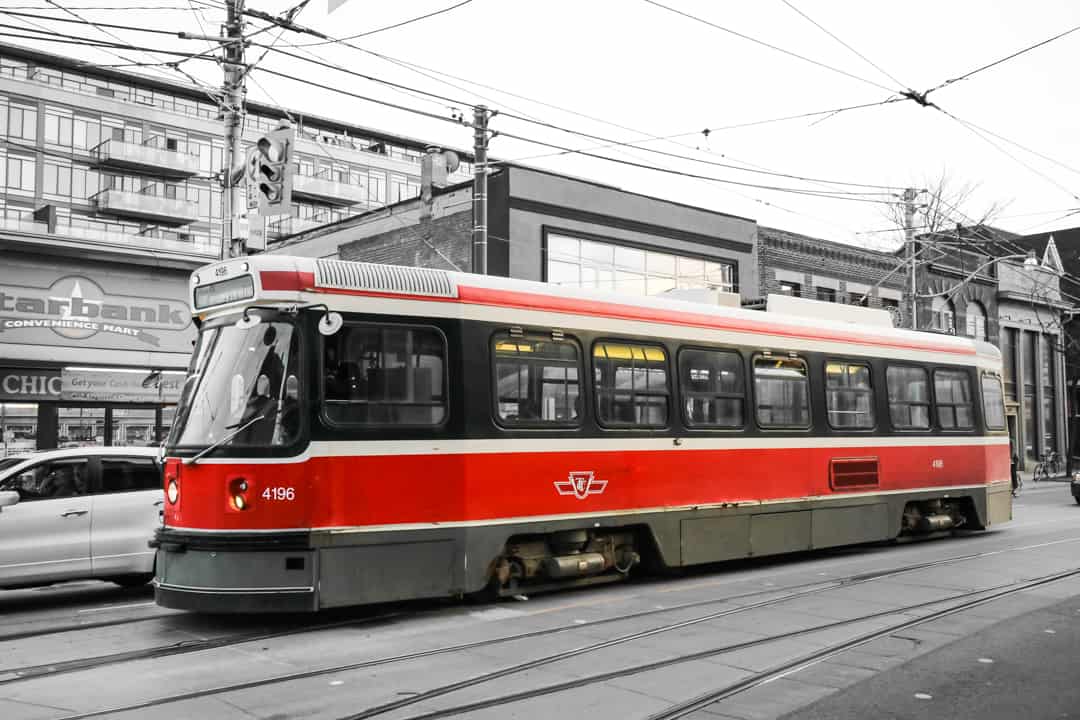 legacy streetcar on the street

legacy streetcar at an underground station

There are 2 types of streetcars you will see around Toronto: legacy and new streetcars. Besides having a more modern design, the new streetcars have a card reader installed at all doors so you can enter from either the front or centre doors. For legacy streetcars, you can only enter from the front door since that is where the card reader is placed. In addition, the new streetcars have the Fares and Transfer Machine onboard near the centre doors. You can pay the fare or take a transfer ticket from the machine if you are transferring to a bus later on. On legacy streetcars, you will need to ask the operator for a transfer ticket. 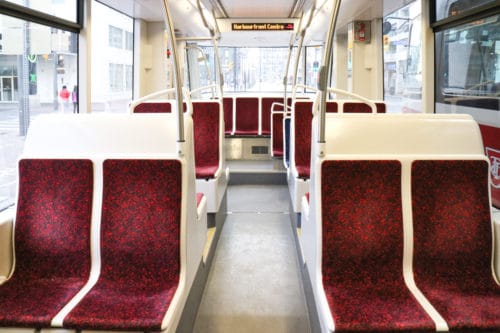 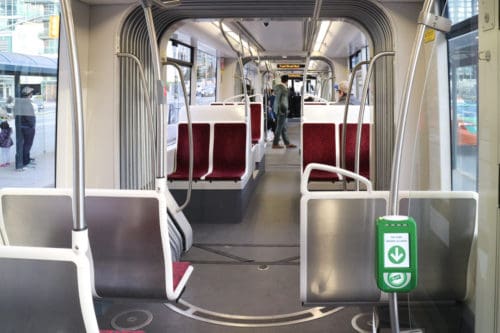 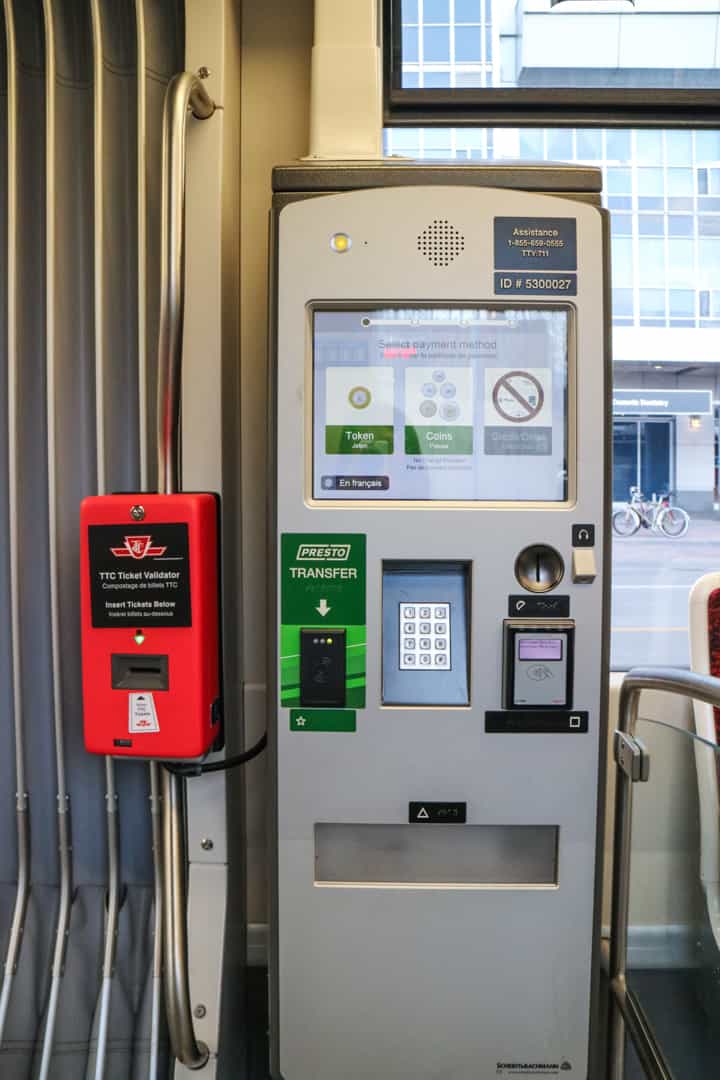 Subway and streetcars are the way to go if you’re looking for an inexpensive, convenient way to get around Toronto. Both run very frequently and many of the streetcar routes are a great way to explore the city. Hop on to the 501 Queen streetcar, which is not only the longest streetcar route operating in North America, but also one of the world’s top 10 trolley rides listed by National Geographic. It will take your through many different neighbourhoods and landscape, demonstrating Toronto’s diverse and vibrant heritage. 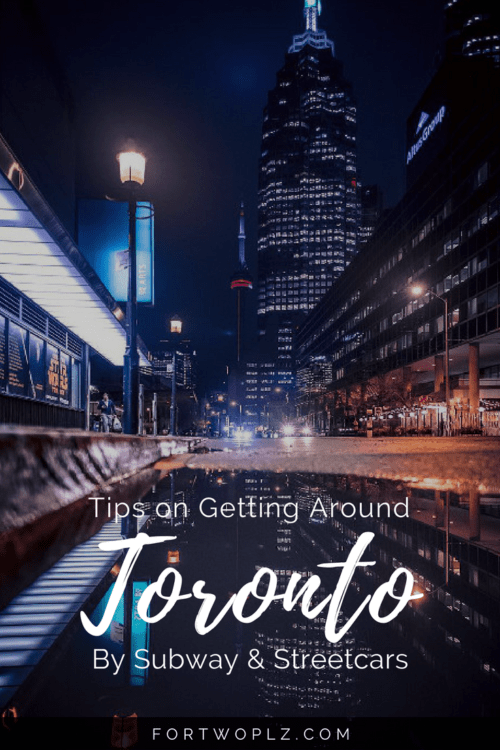 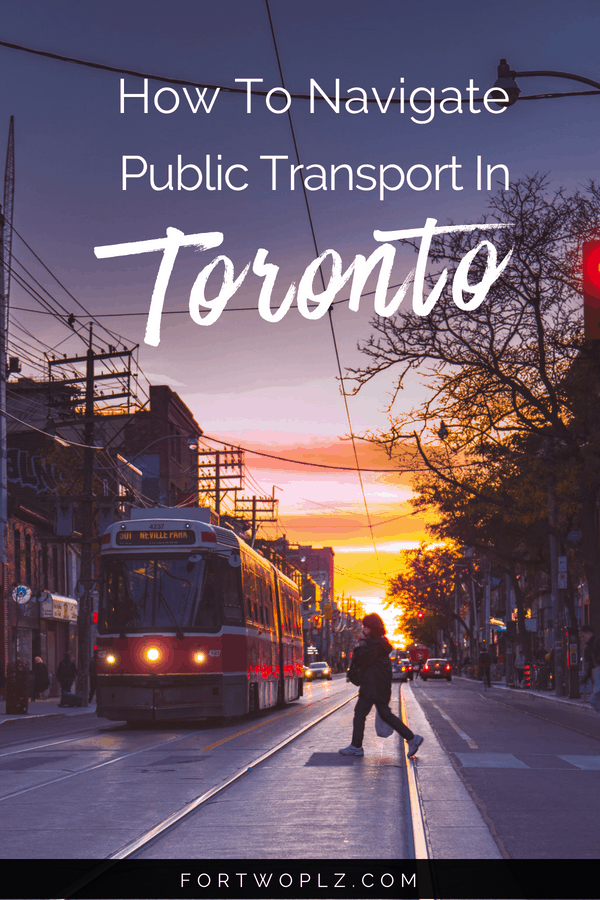 Banff Food Guide: Discovering The Best Places To Eat And Drink In Banff